Ten years ago marked the beginning of the Philadelphia-based comedy improv troupe, Rare Bird Show.  On November 15th, at the 9th annual Philadelphia Improv Festival; Alexis Simpson, Matt Holmes and I had our final show, a reunion and retirement show all wrapped into one.  With two of the three of us now living in Los Angeles and all of us having shifted our energy into a multitude of new projects, we decided to take a final curtain call to celebrate and honor our run together instead of one day realizing it’s been a few years since we’ve done a show.

As a gift to my teammates and to capture a snippet of the tremendous and rapid growth of the comedy improv scene in Philadelphia over these past ten years, my film group Reel 9 Productions, helmed by the ever-talented Erin Davis, is producing a documentary on Rare Bird Show. I believe Philly’s growth as an improv community is mirrored in many other places around the country, and I wanted to archive some footage of Rare Bird Show’s participation during this special era.  We completed principal photography during the festival and can’t wait to edit this project together and make it available for people to see. 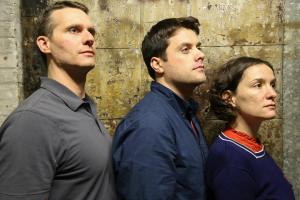 I can’t begin to express my gratitude for the time I spent working and learning with Alexis and Matt.  Beyond being great humans, they rank among the best talent in the comedy and improv world.  Imagine my luck.  An actor hoping to overcome his fear of improv and find a troupe to rehearse with so he could stay sharp in between plays ended up creating a show with these two.  Needless to say, theater went on the back burner for me for nearly four years because improv and Rare Bird Show was all I needed to feed my performance bug.

I have to give a special shout out to Matt Nelson and the Philadelphia Improv Festival for hosting our final show and to the Philadelphia comedy community at large.  Rare Bird Show happened to premiere just as the Philly scene was about to kick it into overdrive and expand into the thriving comedy community it is today.  We rode the beginning of the wave that continues to crest, the result of so many important and special individuals’ love of comedy and their collective hard work.  If I start to name names, I’ll be making long lists and no doubt forget many.  Like they say, it takes a village.  Additional thanks to all the festivals and colleges where we had the privilege to perform, learn and teach over the years of our run.  My life is enriched thanks to all of you.

Rare Bird Show is no more.  If you made it to the final show, thank you.  I wish every performer the experience of playing to such a supportive, packed house and I hope performer and non-performers alike will find something of value in this little doc we’re producing. 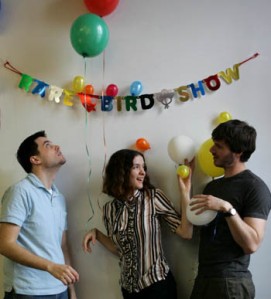